“It’s finally here! Just in time for holiday gift-giving,” advertises the web site of the wildly-bestselling “Left Behind” series of novels of the end times. The “It” is a new video game, based on the books, called “Left Behind: Eternal Forces,” in which players compete with the Antichrist and his United Nations peacekeeping force by battling their way through photorealistic New York City and either converting or killing those they encounter. 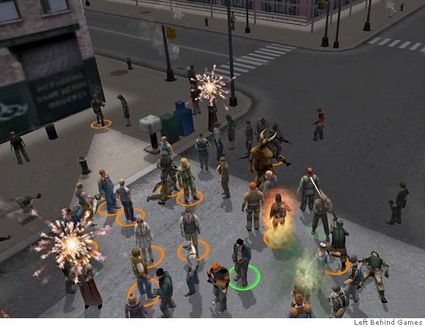 According to Left Behind Games’ Gary Bauman, his company licensed the concept from Tyndale House, the publisher of the books, and the authors have been “supportive” of their work. Indeed, this represents a new medium for the ideas of Tim LaHaye, who co-authored the books with Jerry Jenkins (a successful ghostwriter and former writer for the “Gil Thorp” comic strip) and provided the theological substance.

Prior to the stunning success of the novels, LaHaye was better known as one of the most prominent religious-right activists. He was one of the founders, with Jerry Falwell, of the Moral Majority, and he spoke at the 1980 National Affairs Briefing in Dallas, a crucial event in forming the alliance between the new Religious Right and Republican presidential candidate Ronald Reagan. As head of Family America, and later the American Coalition for Traditional Values, he described himself as “the Christian Ambassador to Washington, D.C.,” and he was among the vanguard of those pushing the Republican Party farther to the right. In 1984, former Republican Rep. John Buchanan (then chairman of People For the American Way) warned, “If we don’t speak up now, the party of Abraham Lincoln may be hijacked by Tim LaHaye and [CPAC head] Terry Dolan.”

LaHaye’s battles against what he called “secular humanism” led him to interrogate the “religious persuasion” of Supreme Court nominee Sandra Day O’Connor, to revive the ancient theory of the Four Humors (see this pamphlet), and to lead his followers to political activism. “Next to your salvation the most important day of your life will be election day 1984,” read one ACTV mailing. (LaHaye resigned as co-chairman of Jack Kemp’s 1988 presidential bid after past statements were made public in which he declared Catholicism a “false religion” and noted “Brilliant Jewish minds have all too frequently been devoted to philosophies that have proved harmful to mankind.”)

One of LaHaye’s main campaigns was The Battle for the Family, as he titled one of his books – in particular “the battle for children’s minds.” “A child’s natural IQ, skills, and potential will be seriously limited if he is not indoctrinated with the time honored moral values of integrity, virtue, honesty, industry, and self-discipline,” he wrote, while complaining that violent crime was caused by “the amoral humanists [who] control the networks, the leading TV shows, writers, producers, and many actors.”

In addition to railing against the “filthy things” children could see on network TV, LaHaye was also a leader of the mid-80s movement to purge public schools of the supposed influence of “secular humanism” – “Child Abuse in the Classroom,” as Phyllis Schlafly called it. “The humanism charge has been leveled against literature ranging from Romeo and Juliet (for purportedly advocating sexual freedom) to The Scarlet Letter (for purportedly promoting witchcraft). One book, Rhymes and Times, has been criticized as favoring the Equal Rights Amendment because it describes a boy cooking something while a girl is reading,” the Chicago Sun-Times reported.

Today we have what could be called Tim LaHaye’s first foray into the video game market, a growing medium for children and teenagers: “Left Behind: Eternal Forces,” designed to “appeal to mainstream gamers and perpetuate Christian values” by simulating the mass-killing of non-Christians.