Right-Wing Authors Claim to be Swindled by Right-Wing Publisher

Some of the authors’ books have appeared on the New York Times best-seller list, including “Unfit for Command: Swift Boat Veterans Speak Out Against John Kerry,” by Mr. Corsi and John E. O’Neill (who is not a plaintiff in the suit), Mr. Patterson’s “Dereliction of Duty: The Eyewitness Account of How Bill Clinton Compromised America’s National Security” and Mr. Miniter’s “Shadow War: The Untold Story of How Bush Is Winning the War on Terror.” In the lawsuit the authors say that Eagle sells or gives away copies of their books to book clubs, newsletters and other organizations owned by Eagle “to avoid or substantially reduce royalty payments to authors.” …

The authors also say in the lawsuit that Regnery donates books to nonprofit groups affiliated with Eagle Publishing and gives the books as incentives to subscribers to newsletters published by Eagle. The authors say they do not receive royalties for these books.

Regnery’s strategy for boosting the sales of its books—often helping to land them on the best-seller list—is no secret: Anyone whose e-mail address is on a conservative list has likely received dozens of “special offers” from the Conservative Book Club, Human Events, or the Evans-Novak Political Report—all part of Eagle Publishing, the parent company of Regnery. 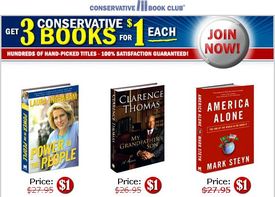 For example, yesterday the company offered a free copy of Laura Ingraham’s “Power to the People” in exchange for a subscription to the print version of Human Events. In September, well before the official release of Ann Coulter’s latest book, the Conservative Book Club had it at the low price of $0. The price range in these offers extends as high as $1 or even $3. While this model is similar to mainstream book club offers, in the case of a Regnery title, Eagle can sell it to its own book club subsidiary at cost, and then sell to customers “at, below or only marginally above its own cost of publication,” cutting the author’s royalties out of the transaction, according to the lawsuit.

While it’s hard to doubt the claim by Corsi and friends that these authors are not making money when their publisher is giving their books away for free, it’s an open question exactly how many of their timeless classics they presume they would have actually sold under normal conditions. The right-wing publishing industry already has a reputation for arranging bulk purchases to get its authors on the New York Times best-seller list; why is this any different?

Indeed, we can expect an ideological operation like Eagle Publishing to make a conservative argument in court: that selling these books for $0 to $3 merely reflects their market price.