For several years, a handful of far-right activists have promoted the idea that the occurrence of African American women choosing abortion amounts to a so-called “black genocide” perpetrated consciously by clinics. But it’s only seeming to catch on now, as more and more right-wing media outlets have picked up on the claim in the last few months. Televangelist Rod Parsley recently embraced the notion as a personal cause, and a UCLA student group deployed actors to call Planned Parenthood offices and pose as racist donors (under the assumption that if the operator accepts the money, the organization must be racist).

Activists promoting the “black genocide” idea converged on Thursday at a Washington, DC clinic protest. From a CBN report:

Kristan Hawkins, Students for Life: Planned Parenthood, guess what? Your secret is out!

Day Gardner, National Black Pro-Life Union: Black America must wake up, and stand up, to this racist organization that purposefully plants abortion facilities firmly in black and minority neighborhoods. […]

Rev. Clenard Childress, Black Genocide: I believe, as always, that if abortion was not lucrative, it would not be legal and they are benefiting off of the blood of innocent babies.

Rep. Trent Franks (R-AZ) attended, promising to offer legislation to make it illegal “to abort a baby based solely on their sex or their race,” while others pushed Congress to prevent Planned Parenthood from receiving any federal funding for its non-abortion health programs. (Federal funding of abortion is already prohibited by law.)

Protesters also linked their cause to the presidential campaign. Gardner’s National Black Pro-Life Union sent a letter to presidential candidates, calling on them to condemn Planned Parenthood’s supposed “racist business practices.” In particular, Barack Obama seemed to be the target. “If (Obama) supports abortion, which is a scourge of our community, which is devastating our community, then we cannot, we must not, support him,” said Dallas pastor Stephen Broden at the protest.

The National Black Pro-Life Union has dogged Barack Obama for some time, as have others at Thursday’s protest. Clenard Childress of BlackGenocide.org, for example, recently accused Obama of being a black “front” man for Planned Parenthood. 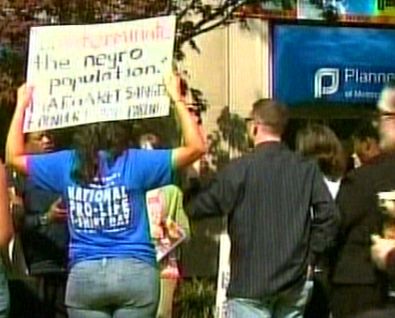