With the reintroduction of the Local Law Enforcement Hate Crimes Prevention Act in the House and the prospect that it may pass in a Democratic Congress, religious-right groups are waging a sizeable campaign to portray the bill as part of a mythical persecution of Christians. Although hate-crimes laws expand penalties for violent crimes causing bodily injury or death (as well as attempts through firearms and explosives), the Religious Right is labeling them “thought crimes” laws the “only effect” of which “is to gag people of faith.” Although federal law has punished hate crimes based on race for more than a decade, the Religious Right is incensed at the prospect of using the law to protect gays as well.

This reaction follows a pattern of asserting that gay rights – or a so-called “homosexual agenda” – will lead to the “repression” of religion in America, an anti-gay marketing effort typified by last year’s “Values Voter Summit” in Washington, where speakers from Mitt Romney to Tony Perkins claimed that, in the words of Alan Sears of the Alliance Defense Fund, “The homosexual agenda and [freedom of] religion are on a collision course.” “They know they must silence the church,” warned Perkins. At that time, the issue was same-sex marriage; the co-sponsor of the federal constitutional amendment to ban gay marriage, Rep. Marilyn Musgrave (R-CO), said that “”If we have gay marriage, our religious liberties are gone!” 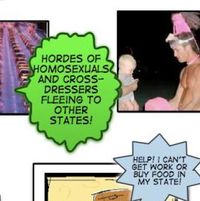 “The ultimate goal of Conyers’ bill is to silence all opposition to the homosexual/transgender political agenda,” claimed Andrea Laffery, director of the Traditional Values Coalition. “So-called ‘hate speech’ will be suppressed because it supposedly incites individuals to violence against homosexuals/ transgenders. Defined by homosexuals, hate speech is any verbal or printed materials that criticize the normalization of sodomy in our culture. The goal is to undermine the First Amendment and persecute Christians who oppose homosexuality.” She added that “Most Christians might as well rip the pages which condemn homosexuality right out of their Bibles because this bill will make it illegal to publicly express the dictates of their religious beliefs”; in addition, TVC published a bizarre cartoon on the issue featuring a talking letter “t.”

Rev. Ted Pike of the National Prayer Network warned that the bill is “the most dangerous legislation ever to come before Congress,” claiming that it would “lead inexorably to the end of free speech.” Michael Marcavage of Repent America claimed that “it will be used to put Christians behind bars.” And the American Family Association asserted that the bill would “open the doors” to any number of outcomes: “Polygamy will be legalized,” the group warned. “Landlords will be forced to rent to homosexuals.”

Indeed, religious-right activists opposing the bill go to great lengths to avoid mentioning that it deals with violent crimes, and not speech or policy. As the Center for Moral Clarity, run by Ohio televangelist Rod Parsley, put it, the bill “represents the intense culture war between those who trust the Bible as a manual for life and those who reject it. This is a battle from which God’s children cannot retreat.” Parsley added, seemingly out of nowhere, that “the everyday world of the American homosexual is a very unhappy world,”

And it’s not just the emotional health of gays that suffers. Given that their sexual practices and lifestyle choices make health and hygiene a practical impossibility, ill health is an escapable part of the gay lifestyle. Therefore, the life expectancy of gays is substantially lower than that of heterosexuals.

Meanwhile, the Right’s campaign is ramping up. Janet Folger is raising money for television ads misleadingly depicting two elderly ladies as being “thrown in jail for sharing the gospel.” (In fact, the far-right group Repent America staged a protest of a gay-rights rally in Philadelphia; the protesters sat down in the street to block the rally, which had a permit, and were charged with a number of violations, but they were not convicted of any hate-crimes offense. Read more here.)

And the Family Research Council has a new website devoted to “gearing up for a major confrontation with homosexual activists over so-called hate-crimes laws, which are actually thought crimes laws, and Christians are the primary target.” According to FRC’s Perkins, “If federal thought crimes laws are passed, your right to share politically incorrect parts of your Christian faith could become a federal crime.” That is – if “sharing” your faith involves targeting gays for violent bodily injury.