It is, ultimately, about moving away from differences between nations that God Himself created for His own divine purposes. It is about following the path of Nimrod and all the others who have attempted to build super-states in defiance of God.

Farah believes God, like him, opposes immigration and NAFTA—not to mention a nefarious superhighway supposedly at the root of the administration conspiracy—but a report from Pat Robertson’s CBN finds a gay-fighting God using that same road as a prophetic highway of holiness.

The concept of a behind-the-scenes “North American Union”—persistently advanced by Farah’s WorldNetDaily, the John Birch Society, CNN’s Lou Dobbs, presidential candidates Ron Paul and Tom Tancredo, and others—is closely tied to the anti-immigrant sentiment that has struck right-wing politics over the last few years. But it has taken on a life of its own, thanks to vivid imagery like “the plan to build a huge NAFTA Super Highway, four football-fields-wide, through the heart of the U.S.” that was alleged in detail by Jerome Corsi last year. Corsi even provided a now-iconic picture, taken from a transportation-industry lobbying group: 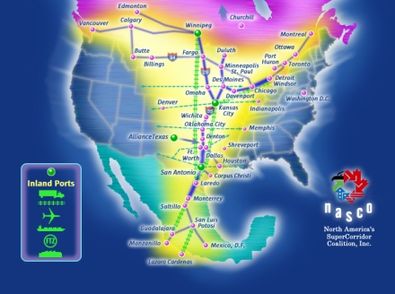 In the picture, it appears as if almost all of middle America has been blanketed by some kind of yellow dust originating from south of the border and traveling up Interstate 35 like a swarm of killer bees. The “NAFTA Superhighway” and the “North American Union” may be “the quintessential conspiracy theory for our time,” as the Boston Globe recently discussed.

While the CBN report doesn’t mention NAFTA or a North American Union, the suspicious highway is central to the story:

A number of Christians have come to believe, because of recent prophecies, dreams, and visions, that I-35 is the highway spoken in Isaiah 35, verse 8: “And a highway will be there, it will be called the way of holiness.”

… [Heartland Ministries’ Hill] believes God has an awesome plan that starts along I-35. “Let’s draw a line in the center of America, set people on fire, get young people saved, get moms and dads saved, get churches on fire, get holy, and watch how it affects the rest of America.”

“What do we expect to see?” [said Cindy Jacob.] “We expect laws to be changed in cities. We expect righteous leaders. We expect a movement, a reformation that will literally sweep the face of the earth.”