Fringe Activist Hopes Anti-Immigrant Rhetoric Will Carry Him to Congress

With his career as an anti-immigrant activist stalled and his unemployment running out, Ted Hayes has announced that he is running for Congress against Los Angeles Rep. Maxine Waters (D). 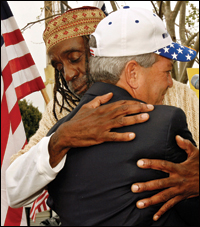 Hayes first came to our attention in 2006 as a spokesman for Choose Black America, a front group assembled by the Federation for American Immigrant Reform, a mainly-white anti-immigrant organization that has, as the Southern Poverty Law Center noted, taken “more than $1 million from the Pioneer Fund, a foundation that funds writers seeking to prove that black people aren’t as smart as whites.”

“This illegal invasion, in my opinion, is the greatest threat to American black citizens since chattel slavery itself,” said Hayes, who also headed his own anti-immigrant “Crispus Attucks Brigade.” According to Hayes, the idea behind these groups is to put a stop to solidarity between blacks and Latinos struggling for civil rights: “They got some brothers running around here like Jesse Jackson and them talking about brown and black unity and ignoring the real issue,” he said. That issue, apparently, is immigrants supposedly taking away the civil rights of blacks: “Don’t come here telling us about our civil rights. These aren’t yours; these are ours. And you can maybe holler human rights here, and we’ll give you some wiggle room on that. But you can’t have them civil rights, brother.”

Before converting to the Republican Party a few years ago and joining the anti-immigrant movement, Hayes was famous as a homeless activist who started the Dome Village shelter in L.A. But his divisive immigration rhetoric—along with his Minuteman connections and confrontational protest style—failed to catch on. A Los Angeles Times article from just two weeks ago noted his events haven’t drawn crowds and his groups haven’t gotten many members or donations. Meanwhile, Dome Village shut down, and Hayes is almost broke, with his unemployment benefits set to run out this month.

But in announcing his congressional campaign, Hayes was hardly looking to move on from the anti-immigrant rhetoric that’s defined him for the past two years. Instead, immigration is the focus of his run:

Hayes says it is unfortunate that many of the new residents have become very belligerent to the blacks. “As the numbers increase, they begin to take on a whole other mindset,” says Hayes, “[that implies] ‘get out Negro, this is now Mexico’ — and they’re threatening people and forcing them out of the community with violence, in fact. In the high schools, they begin to have an intimidating presence and they begin to attack the black children.”

The congressional hopeful says he is challenging Waters this fall because blacks are feeling the ill effects of illegal immigration more than any other group. According to Hayes, illegal aliens are taking jobs that used to go to black citizens. “They’ll take less than half the amount of money that we normally should be paid. They’re forcing us out of our homes. They’re forcing us out of our hospitals. They’re claiming that what they’re doing is their civil right to do so,” he offers.