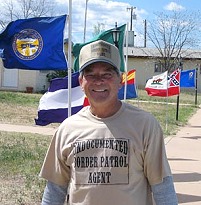 Jim Gilchrist, founder of the anti-immigrant Minuteman Project, told CNSNews.com that there is a “silent war” consisting of “U.S. residents” that “have been killed in action” by “illegal aliens”:

While the mainstream media is focused on the Iraq war, this ongoing silent war is “taking its toll in lives and domestic tranquility,” said Jim Gilchrist, founder of the Minuteman Project.

“Since 9/11 alone, about 45,000 U.S. residents have been killed in action via homicide or manslaughter at the hands of illegal aliens, and about another quarter of a million to 300,000 have been wounded,” Gilchrist told Cybercast News Service in an interview.

Gilchrist said he used the terms “killed in action” and “wounded” intentionally “because essentially, we have a war going on here that’s not a declared war, that’s not a conventional war, but it is costing us 9,000 lives a year.”

Where did he those figures? Apparently from Rep. Steve King (R-Iowa), who has asserted that:

The lives of 12 U.S. citizens would be saved who otherwise die a violent death at the hands of murderous illegal aliens each day. Another 13 Americans would survive who are otherwise killed each day by uninsured drunk driving illegals.

It appears that Gilchrist simply took those numbers together, multiplied by 365 days, and then by 5 years to get his “killed in action” statistics.

But King’s numbers are, as he put it, “extrapolate[d]” from a GAO study he commissioned, which said that that “about 27 percent” of federal inmates in the last few years are noncitizens. As Colorado Media Matters reports in detail, this “extrapolation” is not realistic. Most prisoners in the U.S. are in state, not federal prisons, and most murder cases are prosecuted at the state level. The actual proportion of noncitizens in federal and state prisons combined is a fraction of the number King claims. Using data from the Bureau of Justice Statistics, Colorado Media Matters reports that “According to the BJS, 6.4 percent of all state and federal inmates at midyear 2005 were ‘noncitizens’ — not just illegal immigrants — down from 6.5 percent in 2004, 6.6 percent in 2003, and 6.9 percent in 2002.” Nevertheless, King claimed that “Between the cities, the counties, the state and the federal penitentiaries, that study — my study shows 28 percent are criminal aliens.”

To summarize, Rep. King took the statistic that “about 27 percent” of federal inmates are noncitizens, added one percent to make 28, applied it to state prisons for no reason, pretended they are all “illegal aliens,” and then “extrapolated” a murder rate (apparently by multiplying 28 percent by the number of murders).

The resulting “statistic,” used by King, Minuteman Gilchrist and others, is simply a fictitious number with no relation to reality. What it is related to is the underlying effort by anti-immigrant activists to equate immigrants with criminality – from activists like Gilchrist to the local civic leaders who pass anti-immigrant ordinances.

While reality-based studies appear to show that immigrants commit less crime and may even make communities safer, anti-immigrant activists can always resort to made-up numbers to make their claim.