The Religious Right looks to Maggie Gallagher and Robert George for intellectual cover when arguing that same-sex couples shouldn’t be allowed to marry, but whatever credibility they have as independent scholars will be put to the test by their new venture, the National Organization for Marriage.

Gallagher, president of the low-key Institute for Marriage and Public Policy (and perhaps most famous for taking money from the Bush Administration while promoting its marriage policy), and George, a Princeton professor, started NOM in order to lobby against marriage equality for same-sex couples and to campaign against legislators connected to the issue. The group ran this billboard in Massachusetts before the state’s 2007 election (image via Good As You):

The group is airing a radio ad in New Jersey against a bill that would allow same-sex couples to marry, featuring a child saying, “God creating Adam and Eve? That was so old-fashioned.” Although the bill, entitled “Civil Marriage and Religious Protection Act,” explicitly states that no religious group would be required to sanction any marriage (a requirement the First Amendment prohibits anyway) , the NOM ad hits on public fears that marriage equality for same-sex couples would imperil churches, stating, “They also want to penalize traditional New Jersey churches with threats to state tax exemptions and adoption licenses.”

The claim that giving equal marriage rights to same-sex couples would threaten religious liberty has been a common tactic on the Right. It was the theme of last year’s “Liberty Sunday” rally, and a mailing from the Family Research Council warned that New Jersey would soon “force homosexuality on our houses of worship.” According to Gallagher, who helped develop the notion of the supposed religious persecution that would ensue with marriage rights, the idea is the linchpin of NOM’s approach:

I founded NOM with Princeton Professor Robby George because we recognized that, if nothing changes, state legislatures are going to begin to pass laws to redefine marriage and that our churches, charities, schools and other organizations were going to be persecuted by state governments as a result.

Gallagher is no fool: Inculcating a fear that churches will be forced to perform marriage ceremonies for same-sex couples is one of the most effective ways to convince people to oppose marriage equality. A survey from the Center for American Values in Public Life found that support for marriage equality for same-sex couples increased dramatically among all groups with the assurance—like that contained in the New Jersey bill—that churches would not be required to perform marriages: 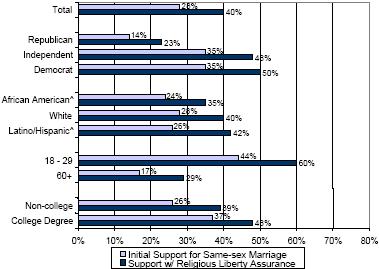