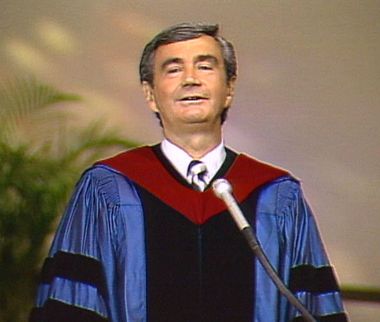 D. James Kennedy, who built up Fort Lauderdale, Florida megachurch and television empire over the last half-century, has officially retired, eight months after he was first hospitalized following a heart attack. Coral Ridge Presbyterian Church has nearly 10,000 members, and his broadcast ministry claims 3.5 million listeners and viewers, but he is best known as one of the founding figures of the Religious Right in the early 1980s, known as the “Ivy League Jerry Falwell.”

Kennedy, who once said that “the diabolical mission” of People For the American Way was “to crush the influence of the Christian religion in American society,” became active in political issues from battling pornography, “secularized” education, abortion, and civil rights for gays to supporting Reagan administration policies like SDI, Iran-Contra, and the nomination of Robert Bork to the Supreme Court. His involvement grew in the 1990s and 2000s, as he organized national conferences for religious-right activism and expanded his influence in Washington.

The 76-year-old Kennedy’s retirement comes just a few months after the death of Jerry Falwell, and again heralds the inevitable passing of the older generation of religious-right leaders — Falwell, Kennedy, 71-year-old James Dobson, 69-year-old Don Wildmon, and others who built the infrastructure and set the pattern for fundamentalism-charged politics.

Much more on D. James Kennedy’s political career below.

He founded the Center for Reclaiming America for Christ, which claimed a 500,000-member grassroots network frequently called upon to sign petitions and contact legislators before it was shuttered this fall. Among the group’s major projects were a 1998 national newspaper and TV ad campaign promoting “gay conversion” and the 2001-2002 “Shake the Nation Back to Life” anti-abortion campaign, which featured TV spots and a program to send thousands of baby rattles to senators to encourage them to confirm a Supreme Court justice who would overturn Roe v. Wade.

Former Reclaiming America head Janet Folger is helping to organize a forum for Republican presidential candidates to face religious-right activists in Fort Lauderdale next month, and Coral Ridge plans to continue its Reclaiming America for Christ Conference next year.

Kennedy also founded the Center for Christian Statesmanship, designed to “restor[e] a vision for Christian statesmanship among men and women in positions of influence and authority in government.” The group hosted Bible study sessions and evangelism training on Capitol Hill, and bestowed its “Distinguished Christian Statesman Award” on leading right-wing Republicans such as John Ashcroft, ousted Alabama Chief Justice Roy Moore, Dick Armey, Sam Brownback, Tom DeLay, and Marilyn Musgrave. The Center was also closed in April, but apparently reopened under the auspices of Kennedy’s Evangelism Explosion.

Kennedy also co-founded the Alliance Defense Fund, a legal team set up to “keep the door open for the spread of the Gospel” in government and schools, and serves or served on the boards of many other groups, like Vision America and the National Council on Bible Curriculum in Public Schools

Kennedy was a prominent exponent of the notion that America was founded as a “Christian nation,” but he claimed that it has fallen prey to “skepticism, atheism, Marxism, humanism, and secularism” and it needs to be “reclaimed for Jesus Christ.” He called the separation of church and state “diabolical,” a “false doctrine” and “a lie” propagated by Thomas Jefferson. In particular, Kennedy targeted the Supreme Court, which he said “has forsaken and forbidden the historic recognition of God in American law and public life. It has placed itself above the people, above the Constitution, and above God.” This translated into his support for extreme-right judicial nominees. In a 1987 direct-mail pitch urging supporters to contact the Senate, he wrote, “We should have this man [Robert Bork] on the court and I think the future of this nation and the Christian cause is very much tied up in this decision by our senators.” More recently, Kennedy was a keen supporter of John Roberts and Samuel Alito.

And for many years, Kennedy attacked the public education system and its “2,340 days of brainwashing” in which “the very Christian ideals we hold most precious are being actively destroyed.” In a 1984 TV special he produced, he warned that a “war against God” in the classroom waged by humanists may lead to a situation like Nazi Germany: “The horror that Nazi Germany became began with a secularized program of education,” he said. He was a signatory to the Alliance for Separation of School and State’s anti-public school proclaimation. More recently, he promoted a new video he produced on the “harmful effects that evolution is still having on our nation, our children, and our world.” In the words of a press release, in the video Kennedy “connects the dots between Charles Darwin and Adolf Hitler.” As he told a 1985 American Coalition for Traditional Values conference, his view is that “Evolution is a fairy-tale for adults.”

Kennedy also frequently attacked gays. In 1989, he wrote in his newsletter, “With other dangerous and contagious diseases, all sorts of efforts are made to identify those carrying the disease, and to minimize their contact with the public. And yet, here we have homosexual rights groups working day and night to make sure AIDS victims ARE NOT IDENTIFIED! … Until action is taken, AIDS victims are free to infect anyone …” Another newsletter item featured a photograph of very young children under the headline, “SEX WITH CHILDREN? HOMOSEXUALS SAY YES!” The newsletter went on to assert that “Adult sex with children has been a crucial component of the homosexual movement all along.” More recently, he was a staunch proponent of amending the Constitution to ban same-sex marriage, from the pulpit, through his media empire, and using the Center for Reclaiming America for Christ.