Bishop Wellington Boone is fast becoming the Family Research Council’s favorite right-wing African American pastor, having participated in an FRC “Battle for Marriage” telecast, a “Take a Stand for Family” rally, a “Watchmen on the Wall” rally, “Justice Sunday III,” the “Values Voters Summit,” and now “Liberty Sunday, where the gay-bashing rhetoric he displayed during the recent “Values Voters Summit” continued.

Relating a conversation he claimed he had with his wife that morning, Boone insisted that homosexuality was unnatural and proposed something that can either be interpreted as evidence that his wife shares his bigoted views or else a clever new plot twist for the next season of “Survivor”

If sodomites – because they’re not gay, it’s a misnomer, they’re sodomites, there were sodomy laws in this country, all over, from 1600 and it was one time a capital offense  … Tell you what, let two women go on an island, all women, sodomites, go on an island, stay by yourself.  Put all the men on another island, this is my wife talking to me this morning, let them stay and tell you what, we’ll come back and see you in about a hundred years.

Boone then went on to reiterate his view that the push for equality is not a civil rights issue, calling attempts to equate the two a ”rape of the civil rights movement,” a remark that elicited rousing applause from the predominantly white audience.  He then went off on a rather disjointed rant presumably related to the recent swearing in of Mark Dybul, who is openly gay, to be U.S. Global AIDS Coordinator.  During the ceremony, Dybul’s partner held the Bible and, according to press reports, Secretary of State Rice reportedly “singled out … Dybul’s partner and referred to [his partner’s] mother as Dybul’s mother-in-law.”

And then I look at USA Today and I see, by our Secretary of State, somebody being sworn in with the President’s wife standing up there smiling.  Now I got issues, because we talk about the President reading the Bible every day, we talk about him praying every day. Now I’m not playing with this kind of stuff here …. And then the comments that were made by the Secretary of State related to the partner of the person that was sworn in – their mother-in-law.  What do you mean their mother-in-law? They’re not married, that’s not a family!

Massachusetts Governor Mitt Romney, who spoke earlier in the program, was careful to make to note that the debate over the issues of marriage should be carried out with “respect and tolerance,” a point that was apparently lost on Boone. 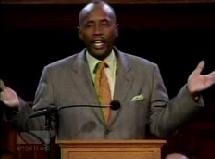 Watch the Video: Broadband or Dial-Up