Rep. Virgil Goode (R-Virginia) returned from the holidays to revive his comments decrying the decision by an incoming Muslim congressman to pose for a photo op holding the Koran after the new Congress is sworn in. Goode published an opinion column in yesterday’s USA Today reiterating his letter to constituents, in which he linked the election of Minneapolis Democrat Keith Ellison, an African American, to a supposed need for a crackdown on immigration, both legal and illegal. (“If American citizens don’t wake up and adopt the Virgil Goode position on immigration there will likely be many more Muslims elected to office and demanding the use of the Quran,” he wrote.) 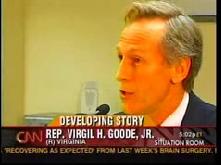 Now, Goode is expanding his web of connections to cite 9/11. Noting that some people are emigrating to the U.S. from the Middle East, Goode wrote yesterday:

Let us remember that we were not attacked by a nation on 9/11; we were attacked by extremists who acted in the name of the Islamic religion. I believe that if we do not stop illegal immigration totally, reduce legal immigration and end diversity visas, we are leaving ourselves vulnerable to infiltration by those who want to mold the United States into the image of their religion, rather than working within the Judeo-Christian principles that have made us a beacon for freedom-loving persons around the world.

Goode’s first letter to constituents arose from attacks on Ellison from the far Right. Radio host Dennis Prager wrote in November that Ellison “should not be allowed to” make use of the Koran, and a handful of others joined in: Roy Moore, the Alabama judge removed for office for defying a court order to remove a two-ton granite Ten Commandments monument from his courtroom, called Islam “simply incompatible with our law,” and Don Feder and Catholic League’s William Donohue defended Prager and the imaginary “rule” that all congressmen swear on the Christian Bible.

Similarly, Goode’s new op-ed tracks the continuing commentary from the right wing. Feder, president of “Jews Against Anti-Christian Defamation,” expanded his defense of Prager and criticism of Ellison to a generalized attack on Islam. “It’s no coincidence that most terrorists on four continents are Muslims,” he wrote, adding that he’d rather Ellison use “The Pop-Up Kama Sutra” than “the handbook of Jihad.” In defending Goode, Feder mocked Ellison for invoking tolerance and justice in a speech to American Muslim groups, writing sarcastically, “After all, there are so many shining examples of justice and tolerance in the Muslim world …” An article in WorldNetDaily attempted to link Ellison himself to terrorist groups, claiming that “Doubts grow over Muslim lawmakers loyalty.” And today Deborah Weiss of the Center for Security Policy wrote in Human Events,

Ellison’s insistence on using the Koran at his private ceremony must be seen in the context of the incremental Islamatization of America. Some Muslim extremist groups, posing as mainstream, advocate actions to desensitize citizens to their anti-freedom goals and try to silence those who oppose them. Ellison’s swearing-in ceremony is just the beginning. Follow his money, his faith, and the company he keeps. I suspect his votes on the House floor will reflect more of the same—an allegiance to values contrary to the Judeo-Christian Bible, contrary to the goals of freedom and tolerance, and sympathetic to political agenda of [the Council on American-Islamic Relations].

Dennis Prager, who started the criticism of Ellison, has returned to the subject with a column claiming that the “Culture War wracking America” is all about the “belief or lack of belief in the divinity of” the Bible. He writes,

This divide explains why the wrath of the Left has fallen on those of us who lament the exclusion of the Bible at a ceremonial swearing-in of an American congressman. The Left wants to see that book dethroned. And that, in a nutshell, is what the present civil war is about.

For his part, tomorrow Ellison will be holding the copy of the Koran once owned by Thomas Jefferson, the author of the Virginia Statute for Religious Freedom whose home lies in Virgil Goode’s congressional district.