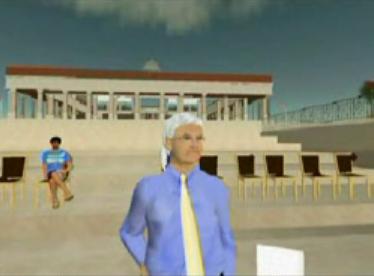 How finicky were the activists at the Conservative Political Action Conference? Romney, McCain, and Huckabee each bent over backwards to cater to the far-right sentiments of the audience, but the speaker who got the most “presidential” reception was Newt Gingrich.

“Hillary and Obama talk about real change—Newt Gingrich delivers real change!” trumpeted David Bossie of Citizens United in introducing this “one-man think tank.” Bossie’s “only regret,” he said, was that Gingrich was not a candidate for president. (Bossie, incidentally, was forced out of his job investigating the Clinton Administration for House Republicans by then-Speaker Gingrich in 1998, but the two have apparently made up, working together on Gingrich’s “Rediscovering God” DVD.)

Rather than take the podium immediately, Gingrich spent about five minutes shaking hands with the cheering audience as bombastic march music blasted in the background. The only thing missing was a balloon drop.

“Run, Newt, run!” someone shouted. “Run for president!” cried another.

No, Newt Gingrich was not jumping in to save these poor right-wing activists from John McCain. (Sorry, Michael Reagan.) In fact, Gingrich said they have an “absolute requirement to support the Republican nominee this fall.” Instead, Gingrich played the role of a medicine-show man—telling the crowd they have a serious condition and he has just the elixir to cure what ails them.

“There is something big happening in this country,” said Gingrich ominously. “We don’t understand it. We’re not responding to it. And we’re currently not competitive.”

I want to suggest to you—and I’ve spent a lot of time since 1999 thinking about this, and it’s part of why I wrote the book “Real Change” and tried to lay out, at American Solutions, a fundamentally different approach to how we thinking about solving our problems—I think there are two great lessons for the conservative movement since 1980. The first, which we still haven’t come to grips with, is that governing is much harder than campaigning. Our consultants may be terrific at winning one election. They don’t know anything about governing. And unfortunately most of our candidates listen to our consultants. And so you end up with people who don’t understand briefing people who don’t know so that together they have no clue.

Gingrich is hardly the first to suggest that anti-government politicians might not be the best at running a government. Still, it’s a little counterintuitive to hear Gingrich railing against “consultants”—after all, he has spent the last year on the periphery of the presidential race, pushing the kind of futuristic hokum that would make any consultant envious.

Under the mind-bending motto “Real change requires real change,” Gingrich has promised dispirited Republicans access to “the world that works”—something like Fedex, but with more 3-D animation. And as he did at the Values Voter Summit, Gingrich passed out copies of his inane polling data (e.g., a majority of respondents said yes when asked whether “we must defeat America’s enemies”)—which he now calls “The Platform of the American People.” Throw in a flashy web site and I’d say he’s in business.

In the end, though, Gingrich’s “real change” was just more red meat for the Right. His first example of “real change” was for Republicans in Congress to razz the Democrats by holding a symbolic vote on English-only every week during the presidential race. Following this path, said Gingrich, “we will win one of the most cataclysmic elections in history” in November. Now, the Right has found anti-immigrant sentiment to be a powerful bludgeon in recent years, but it’s hardly been an electoral winner. Is this really the “world that works,” or one of Gingrich’s “alternate histories”?