The St. Louis Post-Dispatch reports that opponents of a Missouri stem-cell research ballot initiative are distributing misleading brochures that purport to enlist the support of women’s health advocates.

Brochures mailed in recent weeks to more than 90,000 Missouri homes argue that research protected by the ballot measure would exploit women, luring them into the potentially dangerous practice of egg donation. …

“I can’t remember the last time radical feminists lined up with me,” said the Rev. Rick Scarborough, a Southern Baptist preacher who heads Vision America, a national group campaigning against the stem cell measure. …

But supporters of the stem cell measure don’t like the joke. They say religious conservatives are exaggerating feminist concerns about stem cell research. The Missouri measure addresses those concerns, they say, spelling out protections for women who donate eggs.

The brochure warns of the dangers of “egg harvesting” for stem-cell research. But the text of the initiative, in addition to banning human cloning, explicitly stipulates that “No human blastocyst may be produced by fertilization solely for the purpose of stem cell research.”

The Post-Dispatch notes that the 16-page brochure makes no mention of the religious debate over when life begins that has driven opposition to the ballot initiative, and instead calls on voters to stand up against “scientific violence,” saying “women’s bodies are not biological objects for scientific use.” At least one women’s health advocate quoted in the brochure in fact supports research using eggs left over from fertility treatment and then donated, and bioethicist Emily Galpern of the Center for Genetics and Society says that the Right is “co-opting feminist language to suit their cause.”

Nonetheless, Rick Scarborough, the Texas “Patriot Pastors” leader who is using church rallies and pastor briefings about “human cloning” to build a similar network of “Patriot Pastors” in Missouri, complains in an e-mail to supporters that he is facing “a well financed campaign of lies and deceptions.”

When we agreed to go to Missouri three months ago, I assumed that we would be replicating past efforts of awakening Pastors to their God called role to be salt and light and to educate and mobilize their people to be the same.  But shortly after my initial visit to the state, I discovered that in heartland, USA, the leading edge of the culture war had arrived.  In what many consider one of our most conservative states, where numerous religious denominations house their headquarters, proponents of embryonic stem cell research were engaged in a deception that would have made Adolph Hitler proud.  As I studied the issue and listened to both sides extol the virtues and dangers of the proposed amendment to the state constitution, I realized that this was a battle we had to engage, and we have.

As an organization, we shifted our focus immediately and began focusing on mobilizing Pastors of all denominations to fight a well financed campaign of lies and deceptions. 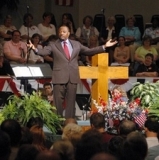 Black America’s PAC founder Alan Keyes “compared what the proponents of this amendment are proposing, to slavery which was finally purged after more than one million men died in battle in America,” writes Scarborough of his first stem-cell rally in Missouri. “He reminded the audience that 150 years ago, Dr. Fredrick Douglas, a black American, stood in pulpits across America, arguing that Blacks were fully human and endowed by their Creator with the same rights as all Americans.”