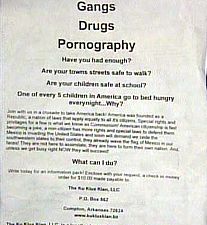 The movement to implement anti-immigrant ordinances on a local level—setting steep fines for those who rent housing to undocumented immigrants, for example, or hire them—has spread in recent months to the affluent northern Virginia suburbs of D.C. Herndon, VA has been embroiled in a dispute over a day-laborer center, and last week a county court struck down the town’s anti-solicitation ordinance. This summer, the state’s Prince William County adopted ordinances requiring police to investigate immigration status on all arrests, and to check immigration status on various public services. Loudoun County and other localities followed suit.

Most recently, anti-immigrant activists have converged on Manassas, an independent city situated inside Prince William County, where a group called “Help Save Manassas” has been pushing for ordinances. “I need to get the rest of the council on board, but I think it’s absolutely something we would want to do,” said one city council member. “It’s becoming apparent that, if anyone’s going to save Manassas, it’s Manassas.” While it’s not clear what the council member is trying to “save” Manassas from, his comments followed a boycott organized by pro-immigrant activists to protest the Prince William County measures.

Now, a new voice has appeared in the debate: the Ku Klux Klan distributed flyers in Manassas warning, “Mexicans are not her[e] to assimilate, they are here to form their own nation. And unless we get busy right NOW they will succeed!” (Watch the video report from WUSA.)

Greg Letiecq of Help Save Manassas distanced his group from the Klan, but incredibly, compared the infamous white supremacist organization to the pro-immigrant group behind the boycott. In the past, Letiecq has objected when Mexicans Sin Fronteras labeled the anti-immigrant ordinances racist. Now, as he puts it, the Klan is also “beating that racist drum again. It’s amazing how much Mexicans Without Borders and the KKK have so much in common,” said Letiecq.